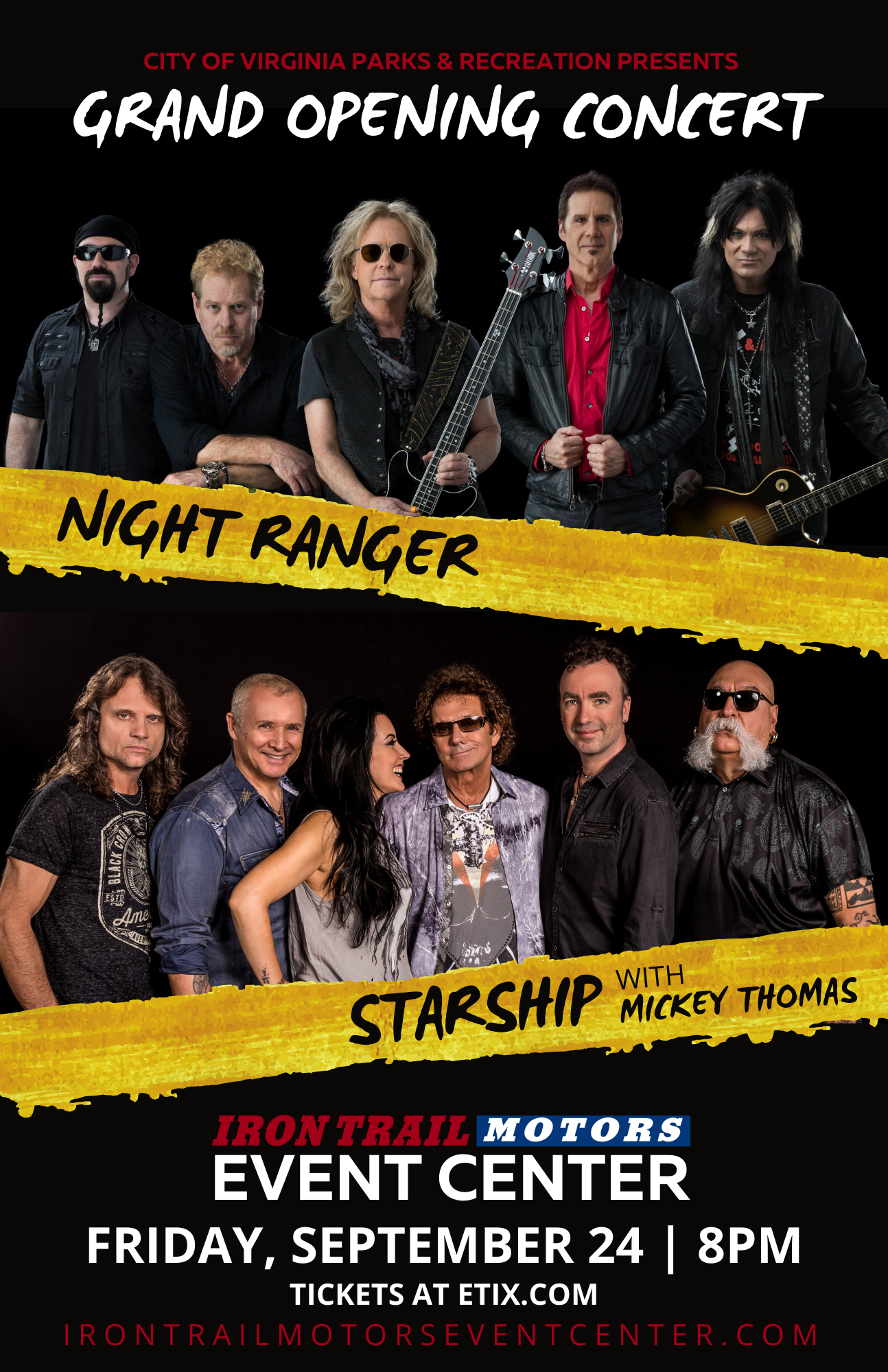 Virginia, MN…. Heavy hitting rock legend, Night Ranger is set to co-headline the Iron Trail Motors Event Center’s Grand Opening Concert in Virginia, Minnesota, with Starship featuring Mickey Thomas, Friday, September 24th at 8:00 PM.Collectively these two acts have sold nearly 40 million records.San Francisco band, Night Ranger, set to release their 12th studio album, “ATBPO” (And The Band Played On), an ode to making music during the COVID era, gained significant popularity during the 80s and 90s with a series of successful albums and singles. Having sold over 17 million albums worldwide, performed across more than 4000 stages, and captivated a radio audience that exceeds one billion, Night Ranger has both epitomized and transcended the arena rock sound and style well beyond that era. Their widespread recognition includes both multi-platinum and gold album status while leaving their indelible mark on the music industry with a long list of best-selling albums including Dawn Patrol, Midnight Madness, 7 Wishes, Big Life and Man in Motion. Their popularity is fueled by an impressive number of instantly recognizable hit singles including Sister Christian, Don’t Tell Me You Love Me, When You Close Your Eyes, (You Can Still) Rock in America, Sentimental Street, Goodbye, Sing Me Away, and Four in the Morning.

Mickey Thomas is the owner of the soaring voice that propelled Starship through the decades of the 80s and 90s. With his soulful and compelling vocals, Mickey has established himself as one of rock music’s most recognizable stars.Mickey Thomas made his mark in 1976 as the lead vocalist on the mega-hit “Fooled Around and Fell in Love” with the Elvin Bishop Band. In 1979, Mickey joined the Jefferson Starship as lead vocalist, after the departure of Grace Slick and Marty Balin. Jefferson Starship immediately scored a #1 hit with Jane. The group was renamed Starship and recorded an amazing string of hits including No Way Out, We Built this City, Sara, and the Oscar Nominated #1 hit Nothings Gonna Stop Us Now from the film Mannequin. Other hits include Find Your Way Back, Stranger, Laying It On The Line, and It’s Not Over Til It’s Over which became Major League Baseball’s theme in 1987.